Racism is a motive in Farm Attacks

We are going to shoot you…because you are white”! Racism is a motive in Farm Attacks
Posted on 19/07/2017 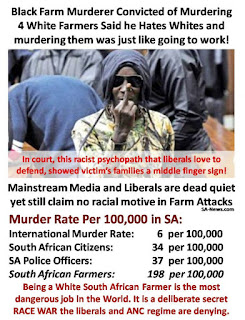 There is no doubt that the farm attacks are led by racism and hatred against whites as has been proven countless times. This fact is proven again, days after the attack on the 77-year-old Mr. Martin Neal of the farm Droogekloof in the Warmbaths district. The deputy chairman of TAU SA’s Waterberg District Agricultural Union, Mr. Henk van den Graaf, who was on the scene and with Mr. Neal spoke about the attack, saying that four terrorists attacked Mr. Neil’s in his home and assaulted him after gaining illegal access to the house. They roughed him up thoroughly so that his ribs broke, he had head injuries and his mouth was bruised badly. They threw him to the ground and tied his hands and feet with shoelaces. They threw a blanket over his head and told him that they are going to shoot him, on which Mr. Neal asked why they wanted to do it and what he did wrong. Then they said to him in English: “Because we do not like white people”. However, they did not shoot him but left him laying on the cold floor while they rampage the house, stole his two handguns, television, computer, mobile phone, safety radio and his Toyota RAV 4 vehicle. Mr. Neal, who usually walks with a kierie, could not get up from the cold floor and spent several hours there until his domestic worker came across him. The farm’s gate was not broken and the lock was unlocked so that the terrorists could easily gain access to the property. Mr. Van den Graaf says that it took the police three hours to get to the scène. “Mr. Neal had already been taken by the ambulance and the HPG security company had completed their investigation at the scene when the police arrived only a few hours later. The two constables of the uniform branch were extremely arrogant and unprofessional, and eventually drove recklessly away from the scene. ” Deon Beukes, the chairman of the Community Police Forum, who was on the scene, has summoned complaints against the two black constables at their senior. Translated from original article in Afrikaans on Die Vryburger