Another White Farmer Murderd In Cold Blood And Set Alight! 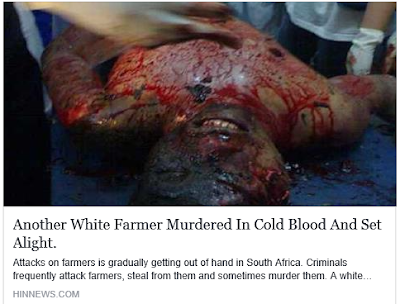 Attacks on farmers is gradually getting out of hand in South Africa. Criminals frequently attack farmers, steal from them and sometimes murder them.
A white farmer, living in Bulwer town, KZN was attacked by a group of men.
…

The suspects stabbed the farmer to death with a garden fork.
The farmer’s wife discovered his body — which had been doused in petrol and set alight — in their home late on Wednesday night.

“She had been helping out at the Sani2Sea cycle race and had come home to their farm to find the access gate on the perimeter of the property locked. She managed to get past the gate and when she approached the front door she noticed blood and then retreated to raise the alarm‚” Berg Protection Service’s spokesperson Brett Deavin said.

“Some other farmers from the area and our reaction officer came to the scene and went inside the house‚ which had been full of smoke. They found the farmer’s charred remains in the passageway and the house had been ransacked. It looks like they took their time and completely cleaned the place out.”

Police spokesperson Lieutenant-Colonel Thulani Zwane said that detectives had registered a case of murder at the Bulwer police station.

“This after a 64-year-old man was killed. It is alleged that the victim was burnt all over the body at the Tatoon farm in Bulwer yesterday‚” he said.

Zwane said no arrests have been made and that the motive for his killing is unknown.